It’s a good thing we ended our trip to Italy in Florence, because it would have been a tough act to follow. Of all the cities we visited — even famed foodie destinations Bologna and Parma — Florence had some of our favorite foods. By the time we got there, we had learned a few important tips and tricks about how to scope out the best foodie finds, and stuck to them with great success.

Florence is the one city where we didn’t use recommendations from any guidebooks, blogs, or reviews. The only suggestion we did take was from our tour guide in Bologna, a local who suggested the hands-down best restaurant of our trip. Pro tip: if a local suggests something, go there first, ask questions later!

There are a few other important things we learned when searching for food options on the fly:

1. In general, avoid sit-down restaurants. They tend to be overpriced and underwhelming, especially during lunch hours. We encountered a few hidden gems over the course of our trip, but they were always far from any major sites or tourist traps.

2. Order adventurously. You can eat spaghetti at home! Go for something you’ve never seen or heard of, and you’re unlikely to be disappointed.

3. Wander the side streets. One of our favorite finds was around 800 ft away from Il Duomo. Seems like a recipe for disaster, right? Wrong. We walked down a tiny side street and found a hidden gelato spot that surpassed all other frozen delights.

When you travel to Florence, or any other city for that matter, don’t get caught up in the FOMO of trying to hit every spot you’ve seen on Pinterest. BUT, if you happen to find yourself near any of these places, get yourself inside and start eating, ASAP.

The aforementioned hidden gelato place, La Strega Nocciola means “The Hazel Witch” in Italian. We stumbled upon this walking back to our hotel after Round 2 at Il Duomo. If you’re going to climb the dome, bell tower, or BOTH, you’re going to want some gelato when you’re finished. Trust me: there are a lot of stairs. Don’t believe the hype and cross the river for some gelato, just walk down this quiet little street off the piazza and look for this sign.

La Strega Nocciola keeps their gelato safely hidden inside of round metal tins at the counter, which is how you know that it’s legit. If you can see your gelato in all its topping-glazed glory before it’s scooped, turn around and walk right out. That’s not the gelato you’re looking for.

In addition to being the best-tasting gelato we had in all of our travels, this also boasted the most intriguing flavor selection and absolute best ambiance. 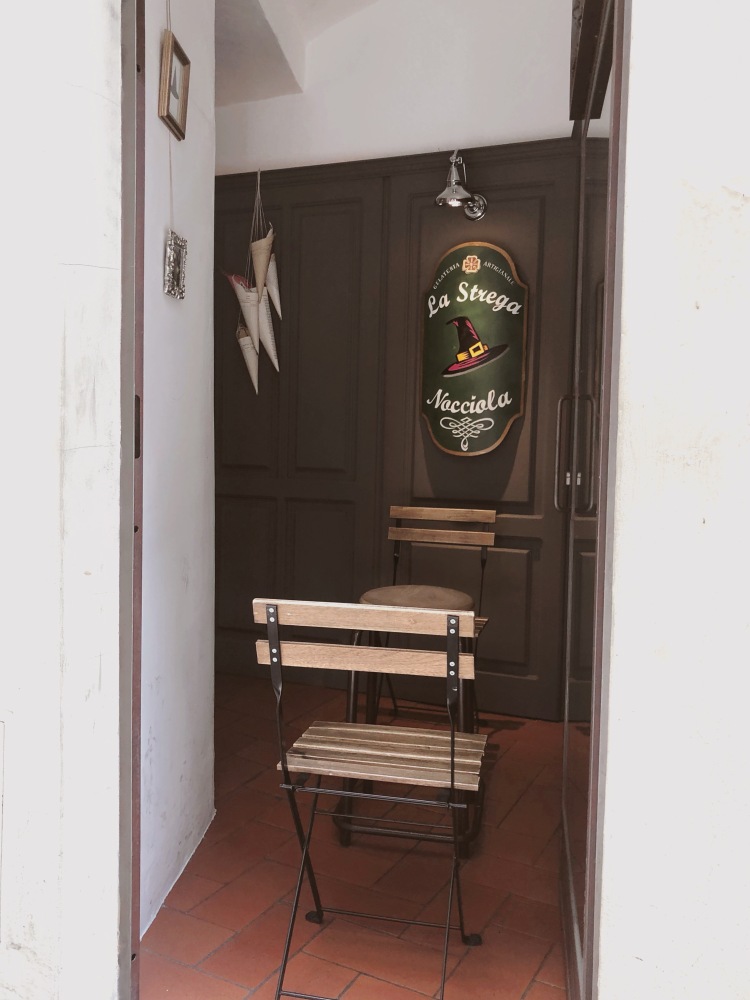 The gastrognome and I both opted for Bergamot sorbet and Lavender gelato. The combination was mild, flavorful, and lightly perfumed. We ate it a fuori (Italian for outside) before diving in to the delicious little book shot across the street. They have both English-language and Italian selections, as well as tote bags, postcards, and other souvenir-type fodder.

We attempted to go back to La Strega Nocciola twice to try more flavors, but both times, it was closed. Case in point: check the hours if it’s a bit out of your way, but definitely don’t skip it.

This was the recommendation from our tour guide in Bologna. We (daringly) went on our first night in Florence sans-reservation, and it’s a good thing that we arrived exactly as they opened or we would never have gotten a table. Coming from NYC, we loved the gritty, off-beat vibe of the restaurant. We sat in a small side dining room covered in graffiti, but there are two other more polished spaces where patrons can sit as well.

If you don’t speak Italian, don’t be intimidated by coming here — the staff speaks English quite competently, and they aren’t rude to foreigners (this is something we did encounter in many other places!). The only time they had trouble was explaining the special International Women’s Day dessert, which we agreed to order pretty much no matter what it was, because it was dessert and why not?

Because we were in Florence, we ordered a bottle of Chianti and a Florentine Steak. We also had Smoked Goose Carpaccio, a pasta with Deer Ragu, and “Medieval-Style” Rabbit. I absolutely love rabbit, and it’s hard to find on menus or at butchers in the US, so whenever I’m abroad, I eat as much of it as I can. The rabbit and the goose carpaccio were definitely the culinary highlights of the meal. The wine was good but not mind-blowing. The steak was fine, but nothing to write home about. The dessert, whatever it was — possibly a mimosa-flower infused cream cake? — was incredible. 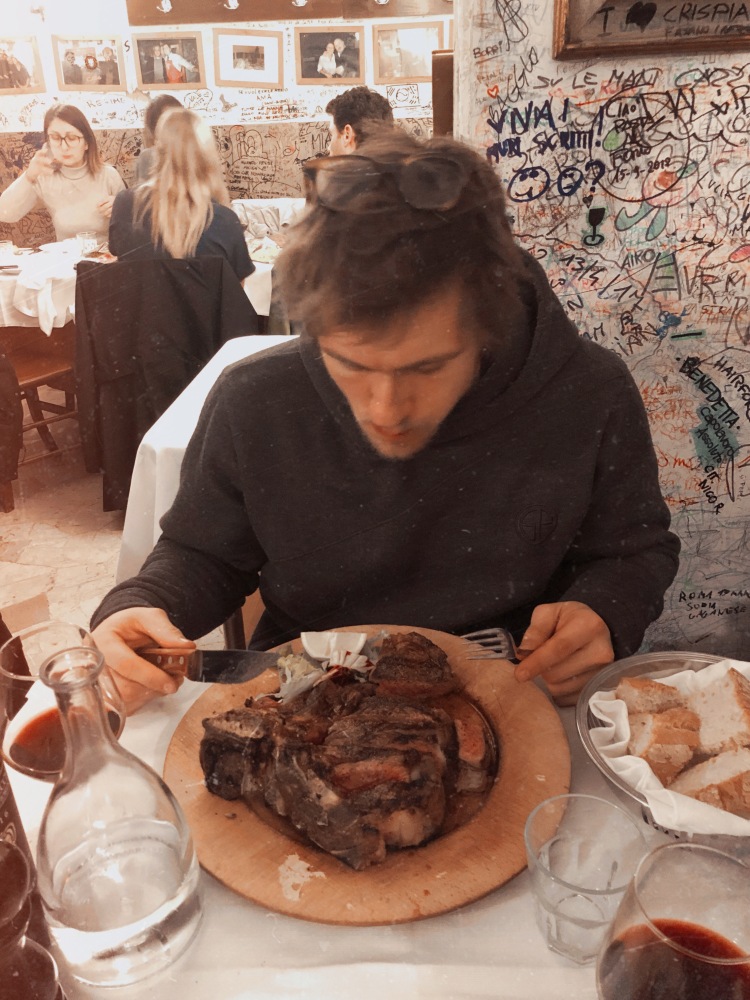 So what was it about Tito’s that made our meal so memorable? The atmosphere, and the people. We really felt like we were having an authentic Florentine experience. Most of the diners in the restaurant were Italian, not travelers. And you get limoncello shots at the end of your meal. They’re basically mandatory. It’s a great, homey touch that makes you feel like you just ate at a friend’s house.

Dinner for two with a bottle of wine will run you around 100 Euros, which we found to be standard just about everywhere we ate for a proper sit-down dinner. Oftentimes, we felt we would have rather had street food, but in this case, it was well worth it.

If you are dead-set on eating here, people tend to make reservations sometimes 1-2 months in advance. If you don’t have a reservation, get there early.

This little stand tucked near the entrance to the old-school first floor of the Mercado Centrale was home to our favorite food item from our entire trip. I’m talking about Lampredotto, the braised fourth stomach of a cow served shredded on a broth-soaked hard roll. It is delicious, and even if you don’t like tripe, you should try it. Lampredotto 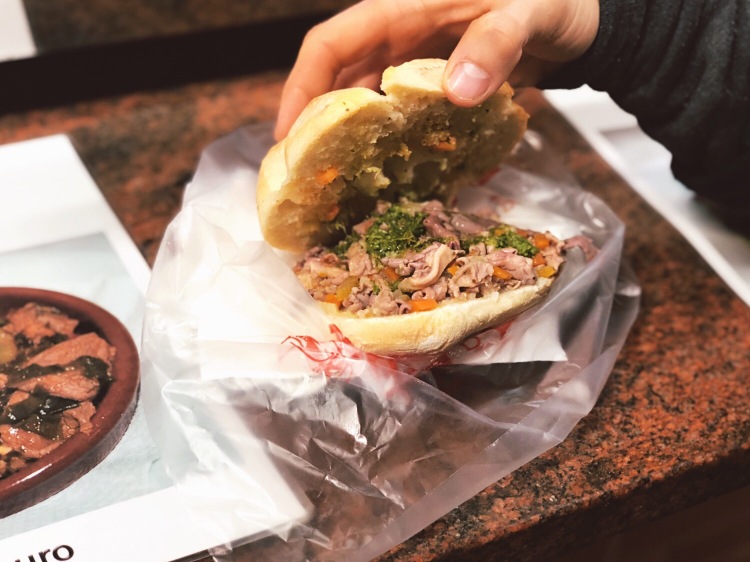 Have you been to these spots in Florence? What are your favorite foods in Firenze?

Real-live person who loves food, throwing large dinner parties in a tiny Brooklyn apartment, and can never have enough coffee.

View all of Carina's posts.